This country needs a revolution now more than ever! See the amount UHURU and RUTO spent on extravagant tours locally and abroad – They don’t care if we die 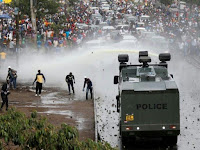 According to an audit report, the two leaders' offices increased both their travel itineraries both domestic and international gobbling up Ksh200 million more in expenses.

In the report released by the Controller of Budget, they spent Ksh527 million in the six months leading to December 2019 as compared to Ksh324.8 million spent in a similar period in 2018.

Overall, the Government's spending on trips went up by Ksh1.3 billion to Ksh8.85 billion.

This is despite a promise by the Treasury to slash the State's spending with a special focus paid on foreign trips.

Treasury was concerned by the increased debt to the budget ratio which had increased to 60 per cent forcing the State to borrow in order to meet some of its annual budgetary obligations.

In that period, Uhuru travelled to more than half a dozen countries including Jamaica and Japan (in August), the USA in September, Japan, Saudi Arabia and Russia in October.

Domestically, DP Ruto, for a better part of 2019, crisscrossed the country in what he termed as official duty pertaining to his office in inspecting development projects.

In that period, the two leaders spent Ksh416.5 million on travel, an increase from the previous year's compounded figure of 271.6 million.