SHOCKING! Man commits suicide in church after his family opposed his bid to marry a second wife - He hanged himself!! 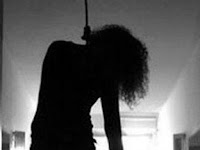 Monday, March 23, 2020 - Residents of Got Ongoche Village in Suna East Constituency, Migori County, are reeling in shock after a 20-year old man hanged himself in church.

This was after his family rejected his bid to marry a second wife.

The man identified as George Matinde, an upcoming musician, hanged himself in church after he was stopped from marrying a lady he had met in Nairobi.

“He got upset and left the home in protest on Thursday after the family restrained him from bringing the woman home,” a family spokesperson said.

The family became anxious after he failed to return home and launched a search only to find his body hanging inside a nearby church.

“The parents told him he was too young to marry a second wife and he seemed disturbed.

“His lifeless body was later found dangling in a nearby church,” he said.

However, it has emerged that the deceased had hitherto attempted to take his own life over undisclosed reasons but a family member managed to restrain him.

Police have launched investigations into the shocking incident.