Shock as Speaker MUTURI slams UHURU and RAILA’s handshake, terms it a big scam - RUTO has been right all along about the handshake 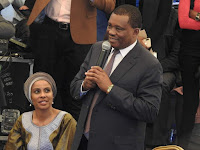 While presenting his proposals to the Building Bridges Initiative (BBI) task force at the Laico Hotel, Nairobi, Muturi lashed out at the political culture of winner-loser negotiations entrenched in Kenyan politics under the premise of peace-making, terming it an infringement on voters’ rights.

He proposed a raft of structural changes in elections, governance and administration of justice.

He submitted that the culture of negotiations between election losers and winners, which is common in the country after every election cycle, like the handshake, was violating voters’ rights.

He said that voters exercise their rights to determine winners and losers, and when individuals strike such deals behind closed doors, their rights are subsequently violated.

Of great concern to him was the political fanaticism built around individuals who use the political parties as mere conduits which they dump at will after achieving their agenda.

He told the taskforce that Kenyan voters had been made to believe that they can only vote for individuals and not political parties and the ideologies they represent.

It is a political behaviour which Muturi said can be blamed for the volatility of Kenyan politics.

According to the Speaker, by following and voting for individuals, Kenyan voters expose themselves to a negative competition that implant hatred after some candidates lose in the elections.