Shock as RUTO’s impeachment process begins in earnest! See how many MPs have already signed up to send him home - Only God can save the man from Sugoi 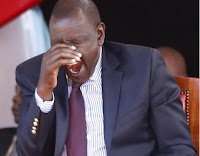 Wednesday March 11, 2020 - At least 165 MPs allied to President Uhuru Kenyatta and Opposition leader, Raila Odinga, have asked Deputy President William Ruto, to resign, accusing him of misconduct and violation of the oath of office.

The lawmakers said that William Ruto’s 2022 presidential ambitions have clouded his role as the President’s principal assistant.

“The Deputy President is guilty of public misconduct and grave malpractices and has not lived up to the oath of office,” the MPs said in a statement read by Baringo Woman Representative, Gladwell Cheruiyot, and Kathiani MP, Robert Mbui.

“He has not brought honour and dignity to the office of the Deputy President,” they said.

The MPs accused Ruto of being dishonest and failing to discharge his duties at the expense of what they said was “an unbridled ambition” for State House.

“With this state of affairs, William Ruto must shape up or ship out.”

“He needs time and undivided attention to pursue the only thing that makes sense and has meaning in his life - dream and campaign for the 2022 presidential elections,” the MPs said.

At the Press Conference, there were about 70 MPs but the organisers said there were 165 MPs that support the statement.

On Saturday, Senate Minority Leader, James Orengo, threatened to start an impeachment process against the DP.