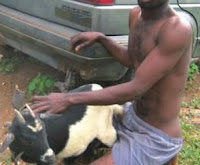 Friday, March 6, 2020 - There was drama after a young man was caught red handed engaging in a bestiality act with a goat.

According to reports, the young man who is identified as Peter David confessed that he had sex with the goat and further disclosed that it was not the first time that he was engaging in the shameless act.

Passers-by who saw the young man engaging in the bestiality act in an incomplete building forced him to have sex with the goat and recorded videos before the area residents arrived at the scene.

The suspect said that he saw the goat grazing in a field and chased it down before taking it in an incomplete building where he carried out the bestiality act.

He further denied claims that he used charms on the goat.