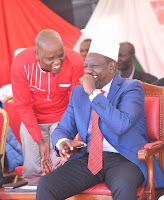 Thursday March 5, 2020 – The Director of Criminal Investigations (DCI), George Kinoti, has indirectly linked Deputy President William Ruto to the murder of Sergeant Kipyegon Kenei, who was an officer in charge of security at Harambee House Annex.

According to Kinoti, Kenei was killed because the DCI was planning to use him as a witness in the case that has touched senior men and women at Deputy President William Ruto’s office.

Kinoti also said that Kenei’s killers were professional assassins who made the murder look like suicide.

However, the DP through his man, Dennis Itumbi, poured cold water on Kinoti’s evidence accusing the top detective of prosecuting murder cases through the media and particularly the Daily Nation.

“@DCI_KenyaI have argued, is the weakest link. Time, as always, vindicates #SystemYaFacts. Glad the @ODPP_KE has noticed the game. It is all Investigations via Media Headlines and completely different and weak evidence in Court. A Movie whose script is on @dailynation,” Itumbi said.

Ruto’s office edited CCTV footage that showed that Echesa‘s was at his office for 23 minutes but the truth is that he stayed there for 1 hr 22 minutes.