See how God has humbled RAPHAEL TUJU after joking with Dr WILLIAM RUTO - KIBICHO, ATWOLI and MURATHE should learn from this 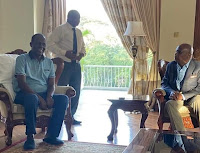 Thursday March 12, 2020 - Jubilee Party secretary General, Raphael Tuju, has for the first spoken to the media about the road accident he was involved in along the Nairobi-Nakuru Highway last month.

Addressing the press on Thursday in Karen, Tuju, who is also a Cabinet Minister without portfolio, said the accident immobilized him for weeks prompting numerous surgical procedures.

The CS, who landed on Sunday from the United Kingdom where he went for specialized treatment, said he suffered multiple injuries including 13 broken ribs, collapsed lungs and injuries to his intestines.

Tuju first underwent surgery at Kijabe Hospital from where he was then transferred to Karen Hospital where he was stabilized before being flown out for specialized treatment.

Tuju, who appeared frail and weak during the presser, said he expected a briefing on Friday on the state of affairs.

He, however, refused to talk about President Uhuru Kenyatta’s succession battle in 2022 saying it is only God who holds the fate of this country.

Tuju is among rogue Government cartels who are working underground to ruin Deputy President William Ruto’s ambition of succeeding Uhuru in 2022.