Poor RUTO! See the evil plans UHURU has for the DP ahead of 2022 - RAILA and GIDEON MOI in the mix 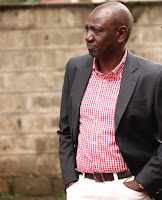 Friday March 20, 2020 - President Uhuru Kenyatta is hell-bent on teaching his Deputy, William Ruto, a bitter lesson for disobeying him, especially in his second term as Head of State.

According to sources, Uhuru is working on a plan that will see former ruling party, KANU, merge with former Prime Minister Raila Odinga’s ODM to hammer the last nail on the ruling Jubilee Party’s casket, the party on whose ticket Ruto plans to seek the Presidency.

Uhuru’s plan is to have Raila succeed him as President for one term and then have KANU’s Gideon Moi take over as President in 2027.

Political observers have intimated that Uhuru is killing Jubilee because it has served its purpose of securing him a second term in office.

He believes it is time it was dismantled to scuttle Deputy President William Ruto’s 2022 Presidential ambitions.