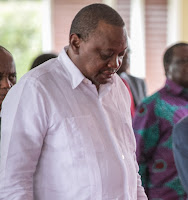 According to reports, the two attended two meetings at Governor Mike Sonko's private office in Upper Hill and one at State House on Sunday, March 22nd.

While at State House, the two are said to have interacted with CECs and Chief Officers whose duties were affected when the National Government took over some functions of the County Government of Nairobi.

They all met Head of Public Service, Joseph Kinyua, and were supposed to meet President Uhuru Kenyatta as well but he was not present.

"If the two test positive then it will be chaos as we have been having daily meetings with the Nairobi Metropolitan Service team at Kenyatta International Convention Centre (KICC) and Harambee House, handing over reports and budgets," one of the officers, who was in the company of the two, stated.

Ms. Mwenda, who is also the Disaster Management and Coordination chief officer, says that they arrived in the country on Tuesday and went into self-quarantine before they left for the State House meeting.

"I was tested in Dubai and when I arrived, I went into self-quarantine until we were told we were urgently needed at State House,” she stated.

She also alleged that the team observed social distancing during the meetings.

Further, she stated that she had been in self-quarantine since the State House meeting adding that she will get an additional test done.

"I am doing a repeat test today.”

“I have not displayed any sign. So far so good," she stated.

Larry, on the other hand, said that numerous tests conducted on them in Dubai showed that they were negative.

"In Dubai, they do body searches with scanners and if you display any symptoms associated with Coronavirus then you are pulled aside and isolated.”

“We went through all that.”

“We were very careful there,” he affirmed.