NTV’s DENNIS OKARI opens up about his brief stint at BBC - His ex-wife BETTY KYALO had a hand in it! 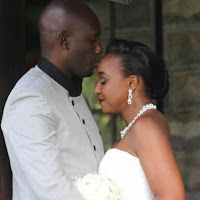 The celebrated investigative journalist joined the international media house in 2014 from NTV but quit after a few months and returned to the Aga Khan owned media house.

His decision shocked many given that BBC is among international media houses most journalists aspire to work for.

Back then, grapevine was rife with talk that Okari failed the cut as he found himself swimming in shark infested waters and opted to return home where he’s a big fish in a small pond.

Speaking during an interview with NTV’s Cross Fire, Okari revealed that he quit because BBC did not give him the chance to tell the kind of African stories he wanted to tell.

He also stated that he felt homesick and wanted to stay close to his family.

Okari had just married fellow journalist Betty Kyallo but their marriage was short-lived after the screen siren cheated on him with Mombasa Governor Hassan Joho.

“For me it was based on a number of things by conviction. One, I felt I wasn’t telling the stories I really wanted to tell.

“The BBC was not giving me that platform because it’s like a beast, there are so many people and there is no space for you to tell the African story the way you want to tell it to be honest.

“Two was family, the travelling was a bit too much for me. I was not enjoying it and I just wanted to stay with my family and just be around.

“I felt the platform was giving me that opportunity to show case what I can do, my talents and storytelling capabilities and the ideas so it was refreshing coming back to do NTV investigates.”

“I didn’t get the opportunity to do that at the BBC. It was fun, it was good experience, and they taught me a lot. It’s a good place but that was it,” Okari explained.