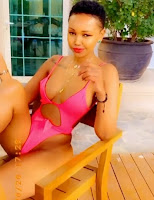 Wednesday, March 25, 2020 - Socialite Huddah Monroe has warned rapper Khaliraph Jones of dire consequences if he continues to diss her in his songs.

It all started a while ago when the award-winning rapper claimed that the petite socialite does not pick his calls.

The hard-hitting rapper said that he has been trying to reach out to Huddah for undisclosed reasons but the socialite has been avoiding him, thinking he’s after her coochie.

In the song Khali raps:

“Huddah masimu hashiki, anadhani mimi natry kumpiga miti. Mimi nina wife sipendi hizo kiki (Huddah isn’t picking up my calls because she thinks I want to have sex with her? I have a wife and I do not like that those publicity stunts)” Khaligraph raps.

Responding to the allegation, Huddah said that she doesn’t know any of Khaligraph’s songs.

“The guy apparently called me so many times and I never picked up. I rarely pick up phone calls but honestly I don’t even know any of Khaligraph’s songs but I think he’s doing well, he won an award. I swear, none of his songs to be honest.” She said.

This did not go down well with Khaligraph who went ahead and recorded another diss track where he took shots at Huddah.

Well, it appears Huddah is not taking this lying down anymore and she has sent a strong message to the OG. 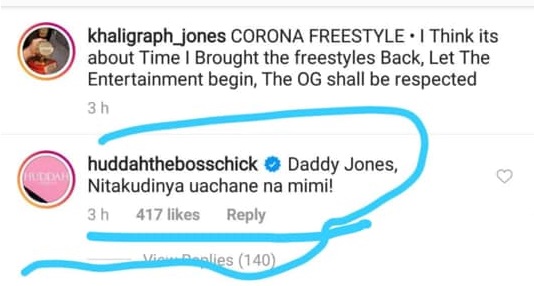