My son, don’t go quietly, haunt all your killers down! KENEI’s father tells his dead son as his widow cries bitterly upon viewing her husband’s corpse – RUTO and ECHESA in much more trouble now 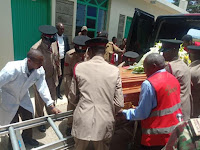 Saturday March 7, 2020 - An emotional Judy Chepsoi, the widow of the late Sergeant John Kipyegon Kenei, broke down in tears yesterday after viewing the body of her husband for the first time since he passed away.

Judy lamented that her life had been shred apart and she will struggle to raise her five-year-old child.

"What will I tell our children when they grow up?"

"Who will help me raise them?”

"It's hard for me to believe he is dead."

"But I leave it to God," Chepsoi wondered.


Chepsoi was escorted from her husband's coffin as the agony of losing a breadwinner swept her away.

He urged him to release the deleted data recovered from his son's phone.


"We are finally at ease after the DCI revealed that my son was murdered.”

“However, what we want to know are the contents of the data that was recovered from his phone.”

“Let that be made public just like the CCTV footage from Deputy President William Ruto's office, which was aired," Chesang urged.

"I have a strong conviction that my son's blood will forever haunt those who killed him.”

“He didn't commit any offence and his murder will not go unpunished."

"I urge all officers to do their duties without fear.”

“We expect transparency in the investigations without any form of cover-up for the sake of any other officer who may be working in such a risky environment," Chesang stated.