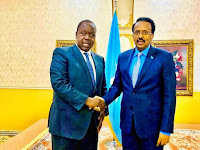 This was confirmed in a statement by Villa Somalia - the official residence of the President of Somalia - marking a significant development in both countries' attempts to end a protracted diplomatic dispute.

According to reports, the decision was reportedly greatly influenced by the United States which reached out to Faramajo via Ethiopian PM, Abiy Ahmed.

The US allegedly demanded that Farmajo calls Uhuru at the height of the wrangles that had started on Monday, March 2nd, over claims that a fugitive from Somalia was hiding in Mandera.

"A source said that following the request by the US, which has funded the Somali army, the Ethiopian Prime Minister called Farmajo and asked him to speak directly with President Kenyatta to calm the tension," said the reports.

On the night of Wednesday, the Somali President called his Kenyan counterpart hours after Kenya warned Somalia not to provoke them, as the tiff between the two neighbours escalated.

Another point of discussion was ways to jointly work on border security by sending committees from both nations to hold talks on strengthening trade ties between the nations.

Matiang'i had led a team of five to Mogadishu to engage Farmajo on the sustained tension at the Kenya-Somalia border with reports indicating that Jubaland forces had crossed over to the border town of Mandera.