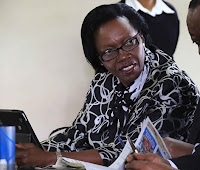 On Wednesday, Itumbi and four others were rendered jobless after President Uhuru, through the Head of Civil Service abolished the Public Service Communications Unit, popularly known as PSCU.

Shortly after the announcement was made, Itumbi, who has since joined DP Ruto’s camp, edited his twitter profile from PSCU director to a ‘Pig Farmer’

While majority of Kenyans are having a field day trolling Itumbi, Karua has chosen to show him motherly love.

Taking to twitter, the former Gichugu MP sent Itumbi a message of support describing him as her ‘son’ and urged him to chin up.