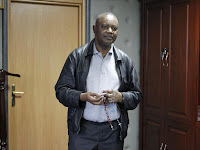 Thursday March 5, 2020 - DCI boss, George Kinoti, has revealed the name of a senior person in Government who ordered the extermination of Sergent Kipyegon Kenei, who was the head of Security at Deputy President William Ruto’s offices along Harambee Avenue, Nairobi.

Kenei’s lifeless body was discovered at his house in South B, three weeks ago and according to the DCI boss, he was killed.

Kenei became a marked man on February 19th when he was summoned by DCI to explain an incident in which former Sports Cabinet Secretary Rashid Echesa and his team visited the second floor of Harambee House Annex and allegedly signed a fake Sh39 billion arms deal.

The DCI was planning to use Kenei as a witness in the case and when Echesa and his associates heard that, they ordered his killing.

Homicide detectives said those who killed the sergeant were professional assassins because they drugged him before killing him.

They also flushed his phone to erase any phone records.