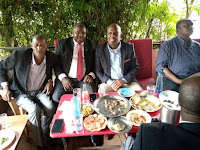 Friday March 13, 2020 - Baringo Senator Gideon Moi has hit the ground running as the race for the Presidential seat takes shape.

According to reports, Gideon is expected to hold a meeting with 1,000 delegates from Central Kenya, a move perceived as key to his 2022 Presidential campaign.

"He is a politician and a leader, and so he is preparing himself because the General Election is not far away," Alex Kiprotich, Gideon's PA, said noting that the meeting had political significance.

With the move, Moi appears to be eyeing a region which has been considered President Uhuru Kenyatta's backyard, which seems to be shifting in favour of Deputy President William Ruto.

After inheriting his father's baton, Gideon has held several other meetings in a bid to position himself for the country's top job.

The meeting will discuss matters of national significance, including the need to throw weight behind President Kenyatta and ODM leader, Raila Odinga, in the Building Bridges Initiative (BBI).

The KANU leader is reportedly in the process of readying the party for the next General Elections.

Gideon has in the past few days held a meeting with delegates from across the country at his Kabarak home, amidst the family's culturally obligated mourning period of 40 days since Moi's passing.

In the previous week, Gideon hosted Siaya Governor Cornell Rasanga accompanied by a delegation of leaders from Nyanza, where discussions, among them the BBI report, were matters of interest.