From State House to the Pig Sty - Kenyans troll DENNIS ITUMBI after UHURU fired him on his birthday! (LOOK)

Thursday, March 19, 2020 - Netizens are having a field day mocking Dennis Itumbi after he was fired on his birthday from his plum State House job.

On Wednesday, President Uhuru, through the Head of Civil Service abolished the Public Service Communications Unit, popularly known as PSCU.

Consequently, Dennis Itumbi, who was the unit's director and four others - Eric Ng’eno, James Kinyua, David Nzioka and John Ndolo were rendered redundant.

Shortly after the announcement was made, Itumbi, who has since joined DP Ruto’s camp, edited his twitter profile from PSCU director to a ‘Pig Farmer’

However, Itumbi’s sacking has not come as a surprise given that he has time and time again defied Uhuru’s directive to civil servants to shun 2022 politics and focus on service delivery.

He has also been at loggerheads with the State after he was accused of authoring a fake letter over DP Ruto’s assassination plot.

He was arrested and locked up for a week and the case is still in court.

Check out the reaction from Netizens below. 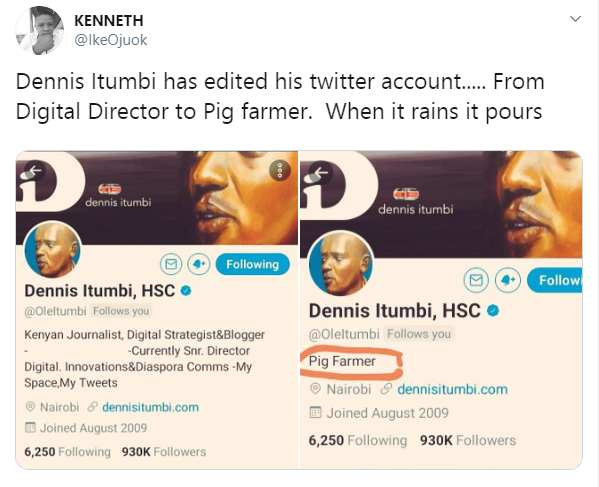 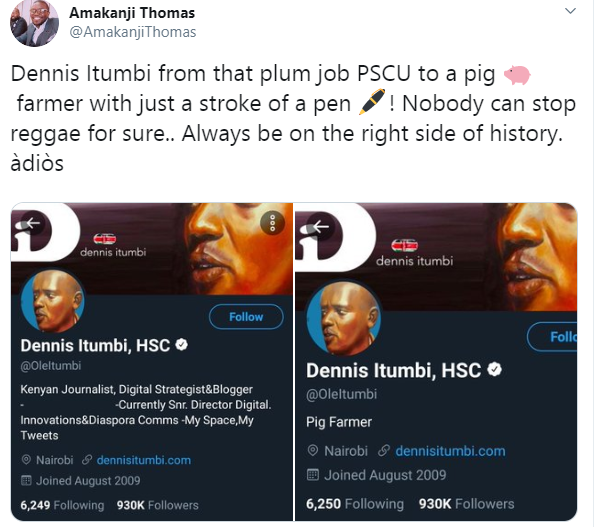