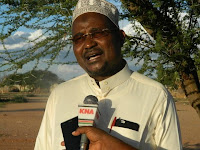 Thursday March 26, 2020 - There was drama at the Kanagoni checkpoint in Tana River after Garsen MP, Ali Wario, was caught up in a scuffle with County health officials who have been screening individuals traveling from the neighboring Kilifi County.

Wario was travelling to Tana River from Kilifi where there have been cases of Coronavirus.

He was stopped for mandatory screening which involves checking a person's temperature because fever is one of the symptoms of corona virus.

However, Wario declined to be screened and accused the health officials of using substandard equipment which were likely to infect him with the virus.

As the officials persisted, Wario is reported to have physically removed the road barrier erected by the officials before driving off to a meeting.

The officials are reported to have sought police intervention to have the MP forcefully screened after which a manhunt was launched.

However, before he could be arrested, Wario agreed to take the screening test while returning to Kilifi and claimed to have been headed to an urgent meeting during the initial incident.

"I talked to the MP and he told me he was rushing to a function to launch some projects and he was late.”

“That is why whatever happened happened," Tana River County Police Commander, Fredrick Ochieng said, adding that the legislator had been pardoned.