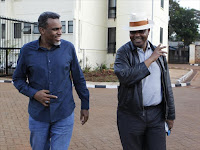 Thursday March 5, 2020 - Deputy President William Ruto may be a person of interest in the murder of Sergent Kipyegon Kenei going by what the Director of Criminal Investigations (DCI), George Kinoti, has said.

Kenei, who was the head of security at the DP’s Harambee House Annex, Nairobi, was a key witness in the ongoing Sh39 billion fake arms deal investigation involving former Sports CS, Rashid Echesa, and was killed at his house in South B estate, Nairobi.

In a presser on Thursday, Kinoti said that the killers of Kenei made every effort to cover their tracks.

Kinoti said his detectives established that data on the slain officer’s phone was flushed, leaving little to rely on to trace the people he last spoke to before he was murdered.

“Sending money to his family, leaving behind a suicide note and so forth but it’s a clear case of murder," Kinoti said.

Kinoti also exposed Deputy President William Ruto by saying Echesa stayed at his office for 1 hour 22 minutes and not the 23 minutes the DP claimed.

Ruto is on record saying that Echesa stayed at his office for 23 minutes only.

“Office of the Deputy President does not procure for any ministry/department. Question: Other than 23 minutes in Annex, for months, which government offices involved in the ‘tender’ did the scammers visit? Did they access DoD? Who facilitated? Who did they meet? Get the truth. Forget the sponsored nonsense in media,”the DP wrote on Twitter after DCI questioned Echesa over fake arms scandal.