BBI is being used to propagate violence, fights and hatred - Catholic Bishop says and urges Kenyans to reject it. 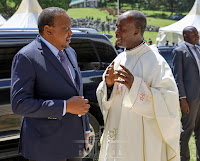 Tuesday March 10, 2020 - An outspoken Catholic Church Bishop has poured cold water on the Building Bridges Initiative (BBI) saying it has been hijacked by selfish politicians who are using it to achieve their own selfish agenda.

Speaking on Monday, Nyeri Archbishop Anthony Muheria said that the BBI is no longer about unity as it is being used to propagate violence, fights, hatred and political agendas.

“Instead of uniting Kenyans, the project is now being used to polarise us.”

“It is now about those in favour and against it, which is not the foundation on which it was deemed fit,” Muheria said.

Muheria further stated that those who favour the BBI are not concerned about what the common mwananchi will gain rather what they will gain from it.

“That, I am afraid, will not help unite this nation,” he said.

He called on politicians to peacefully explain the contents of BBI to Kenyans and leave them to decide which way to follow.