After handing over Nairobi to UHURU, SONKO now given only 48 hours to act, failure to which he will be arrested and prosecuted 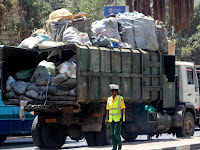 Thursday March 12, 2020 - Nairobi City County boss, Mike Sonko, risks jail time after the National Environment Management Authority (NEMA) moved to restore sanity in the garbage mess that the city has been turned into.

In a statement issued on Wednesday, NEMA threatened County officials, beginning with Governor Mike Sonko, of prosecution if all garbage was not collected within two days.

"NEMA gives Nairobi County 48 hours to clear all the uncollected solid waste that has littered the city," read the statement in part.

It further requested that the officials responsible table a report on the subsequent cleanup or risk prosecution.

"[County officials should] report on compliance to the Authority within 7 days failure to which officers in charge will be prosecuted," concluded the statement.

The ultimatum comes days after Nairobi garbage collectors downed their tools in protest on March 3rd, 2020, over non-payment of wages for over three months.

The disgruntled workers made their grievances known in a dramatic protest on Tuesday morning as they marched through Nairobi CBD emptying every bin on their way onto the streets.

The workers have not been to work since.

In February, City Hall had announced that it had signed a one-year renewable contract with the National Youth Service (NYS) to help in garbage collection in the capital but the agreement is yet to take effect.