You won’t believe what MOI told IDA ODINGA even after detaining her husband, RAILA, without trial for attempting to overthrow him and torturing him for years while in detention 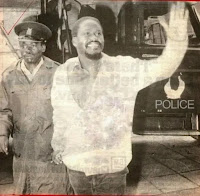 Speaking during an interview, Ida intimated that it was a tough journey to forgive Moi, but she had to do it because it was the right thing to do.

Raila was detained by Moi without charge over suspicion of his supposed involvement in the 1982 coup attempt, where he was kept in prison for six years.

He was released in February 1988, only to be rearrested in August of the same year and to be released in 1989.

Odinga was later rearrested and jailed in 1990 before being released in 1991, after which he fled to Norway to seek asylum.

While revisiting the incident, Ida intimated that she too had lost a lot in terms of job opportunities, and basic rights as a human being and a wife, matters that she intimated would make anyone frustrated and bitter with the ruling system.
"I was never happy at all with Moi, until one day one of his close friends, Reuben Chesire, took me to his home and we both said sorry."

"Once I decided to go all-in, I thought perhaps Moi needed to hear me out on this forgiveness call.”

“I felt the need that I would have to reiterate the wrongs done to me before we reconciled with Moi," she indicated.

She, however, insisted that she was glad that she reconciled with Moi while he was still alive, and also indicated that the Moi and the Odinga family had remained friends to date.

"Forgiving people is not an easy task.”

“But as Moi said, Kama iko mtu nimekosea anisamehe (If there is anyone that I have wronged, I beseech them to forgive me).”

“We followed his wise counsel," she stated.

"When you forgive, you become free in your heart. Friendship flourishes.”

“He was a man with a clean heart, and he loved everyone," she concluded.