Who is really in charge of the country and MOI’s funeral between RUTO and MATIANG’I with UHURU away in the US? PHOTOs from Lee Funeral Home have left a lot to be desired – Look!

Wednesday February 5, 2020 - Photos of Deputy President William Ruto and Interior CS Fred Matiang'i at Lee Funeral Home after the death of former President Daniel arap Moi have left a lot to be desired as to who exactly is in charge.

Matiang'i and Ruto's photos have been a subject matter since President Uhuru Kenyatta elevated the CS, putting him in charge of oversight of Government programmes in January 2019, a move which many analysts claimed demeaned Ruto who had always identified himself as Uhuru's right hand man.

When the news of Moi's death broke on Tuesday, February 4th, the President was out of the country, which leaves his DP in charge according to the Constitution, but that is not the case.
When Matiang'i arrived at the morgue, he was flanked by top military brass among them Chief of Defence General Samson Mwathethe.

But when Ruto made his way to Lee Funeral Home later, he seemed a lone ranger with only his security and aides following behind. 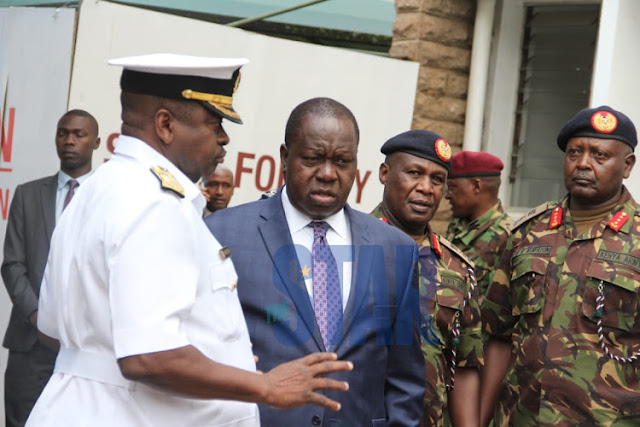 Earlier on, Matiangi and Mwathethe condoled with Moi's family at Kabarnet Gardens, Nairobi, where they held the initial burial preparations with the military officials taking over the burial plans.

This was Matiang's second meeting after he, and his defence counterpart, Monicah Juma met Mwathethe, Mutyambai and Interior PS, Karanja Kibicho, at State House before they went to Nairobi Hospital where Moi's body was being held.

It as later transferred to Lee Funeral Home.

On the other hand, while at Harambee Annex, Ruto announced that Kenyatta had directed the Head of Public Service, Joseph Kinyua, to take charge of the State funeral arrangements.

Ruto later visited Moi's family in Kabarnet Gardens, Nairobi, where he had a closed door session with, among others, his Rift Valley rival, Gideon Moi.

The two haven't been seeing eye-to-eye and in early 2018, Gideon reportedly blocked Ruto from visiting Moi in Kabarak.