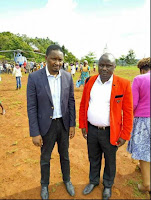 Tuesday February 4, 2020 - Former Agriculture Cabinet Secretary, Mwangi Kiunjuri, has lamented abbout how he lost his position in the Cabinet, blaming President Uhuru Kenyatta in the process.

Speaking during an interview at Inooro FM, Kiunjuri blamed Uhuru for using and dumping him like rotten garbage.

He indicated that Uhuru was the reason behind him dropping hhis ambitions to vie for the Laikipia County gubernatorial seat in 2017.

According to him, Uhuru promised him the Cabinet Secretary position leading him to drop his bid, in an election which was won by Jubilee Party’s Nderitu Muriithi.

“I was ready to rejoin politics and vie for the Governor seat in Laikipia County in the 2017 General Elections.”

“I was told not to vie for the position.”

“Out of the request by the President, I willingly obliged.”
“Under very unclear circumstances, I am now out of the Cabinet and must wait for years for another election to happen,” remarked Kiunjuri.

Kiunjuri also indicated how he had all hopes set for the position from Uhuru Kenyatta and never expected a termination before 2022.

“I am now jobless and the status will remain for the next two years.”

“No one would like to be in my current state,” stated Kiunjuri.

The former CS also stated that he was a victim of unending humiliation from politicians and State officials.

“Even when you terminate a contract for your employee, you don’t continue insulting them.”

“You let them live their lives and ponder on the next step.”

“Our doors will always open when we trust in God.”

“We are still relevant in the political arena and can push on to win any position we set our eyes on,” remarked Kiunjuri.

Kiunjuri further refuted any claims that he was involved in the loss of Ksh49 billion intended for the purchase of maize from farmers, terming this as unnecessary politics.

“Before I was appointed as Minister for Agriculture, the ministry had paid the larger part of the money and I was only left to pay Ksh7 billion.”

“I can show all records of the Ksh7 billion and who it belongs to,” added Kiunjuri.