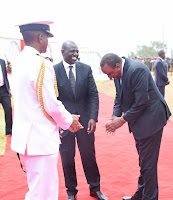 This is after he sent Interior Principal Secretary, Karanja Kibicho, to inspect development projects in the area instead of Ruto.

Kibicho arrived in Kirinyaga County to follow up on President Kenyatta’s promises to the County residents, whereas DP Ruto was scheduled to arrive at Kiburia Girls Secondary School in the same County for an education empowerment program.

According to a reporter, Kibicho was sent by Uhuru to follow up on the implementation of his promise that rice farmers would be well considered by his Government.

“Kibicho is here to personally get a report from the rice farmers on the President's behalf as to whether the price increment order was implemented.”

“He will also check on the progress of construction of the Wang’uru Stadium which the President promised to locals for sporting activities,” remarked the reporter.

A day prior, President Uhuru Kenyatta told residents of Nyandarua that he will no longer send people around him to inspect projects because they had failed him.

The visibly agitated President noted that some projects had failed to start because those he sent had started focusing on their own selfish needs.

Before, Uhuru would send Ruto to inspect projects on his behalf but not anymore.