UHURU is becoming ruthless by the day! See what he did to RUTO and his allies at State House - This political marriage is over even if the DP doesn’t want to accept it 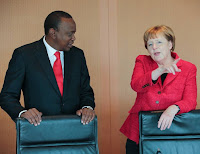 Led by Maara MP, Kareke Mbiuki, the legislators claimed that Opposition leaders had better chances of visiting the President at State House than the Jubilee lawmakers.

Mbiuki claimed that he was recently turned away at the entrance when he wanted to visit the highest office in a bid to salvage his position as the Chairman of Parliamentary Committee on Natural Resources and Environment.

“It has become a no go-zone for some of us in Jubilee Party, it is surprising that opposition is controlling the state!”

“In fact, I think I have to talk to Dagoretti North MP Simba Arati nicely before am allowed to State House,” Mbiuki complained.

Mathira MP, Rigathi Gachagua, said that they are aware that State House had been invaded by Opposition Leader, Raila Odinga, and that was why some of them no longer bothered to make appointments.

The lawmakers are said to have been trooping to State House to lobby for support amid reports that there is a plan to restructure leadership in the National Assembly.

On his part, Mwala MP, Vincent Musyoka, noted that majority of MPs are not interested in going to State House because the President is only two years away from exiting the office.

Similar sentiments were echoed by Mount Elgon MP, Fred K’apondi, and his Fafi counterpart, Abdikhaim Osman, who disclosed that there are plans to ensure Deputy President William Ruto and his allies have no access to the house until 2022, if at all he wins the Presidency.