Thank you MZEE! See just how much KENYATTA’s family has given to MOI’s family to aid in his burial as a token of appreciation for grooming UHURU to be President 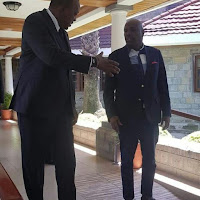 Thursday February 6, 2020 – President Uhuru Kenyatta’s family has donated a cool Sh10 million to help the late former President Daniel Arap Moi’s family organize his burial despite the fact that it will be a State funded function.

According to sources, the Kenyatta family has a lot of respect to the late Head of State who groomed the current President Uhuru Kenyatta to be where he is now.

During the Moi succession race, Baringo Senator Gideon Moi prevailed upon his father against all odds to have him run as the KANU presidential candidate.

It’s the same Moi who asked the late nominated MP, Mark Too, to step down to have Uhuru land in Parliament for the first time after being rejected in Gatundu.

Sources also revealed that despite being a State burial, Moi’s family friends have been donating towards his farewell to carter for expenses not factoring in the State budget.