Stranger in his own Government as MATIANG’I isolates RUTO completely from MOI’s burial arrangements – Did UHURU put him up to this? 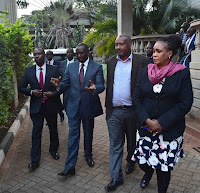 This is after he was sidelined from the burial arrangements of ex-President Daniel Arap Moi.

The DP is seen as a lone-ranger in Moi’s burial arrangements as CS Fred Matiang’i appears to have taken charge in President Uhuru Kenyatta absence.

The official Government position has been streaming from the Interior Ministry and not from Ruto as should be the norm given that he’s the number two in command.

At the Lee funeral Home, Ruto was not accompanied by top Government officials while on the other hand Matiang’i appeared in the company of who is who in the security docket.

Later, Ruto announced that the programme had been taken over by the public service boss, Joseph Kinyua, but Matiang’i quickly contradicted him saying the funeral was a military affair.

Similar incidents are expected ahead of the burial of the late Head of State.