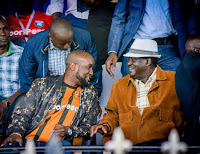 Taking to twitter, Karauri accused Kenyans of ‘bringing down their own’ hours after English Premier League side, Everton announced it was terminating its partnership with SportPesa at the end of the current campaign.

While reacting to the Everton announcement, city lawyer, Donald Kipkorir, said that developed countries such as England are banning gambling while poor Kenyans are excited with the vice.

“Ireland then now England is terminating all contracts with SportPesa.

“These are highly developed countries who have decided to do away with gambling in Sports… Kenya, a poor and miserable country is excited with gambling and Prime Time News is even sponsored by betting companies,” Kipkorir tweeted.

This forced Karauri to respond by stating that Kenyans don’t support their own.

“The biggest betting company in the world – Bet365 – resides in England.

“Kenyans love bringing down their own, and now the same Bet365 is probably the most popular betting site in Kenya, more revenue for them and more tax revenue for the UK.” Karauri wrote.

Everton signed a five-year shirt sponsorship deal with the Kenyan betting firm in 2017 worth Sh910 million a year.

In October 2019, SportPesa closed shop in Kenya after the Government imposed a 20% tax on stakes.