SONKO should return and save Nairobians ASAP, otherwise they are fucked - See what ELACHI and her cartels are planning to do at City Hall 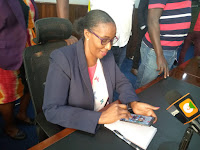 Monday February 10, 2020 – After Nairobi Speaker, Beatrice Elachi, moved to court seeking to take over as Nairobi Governor following an injunction barring Mike Sonko from accessing his office, new details have emerged about a plot to loot the city with Elachi at the helm.

Sources have intimated that a move to control and loot billions owed to suppliers and contractors is the genesis of the current leadership crisis at Nairobi County City Hall.

The Ethics Anti-corruption Commission has already cleared payments of what it termed as genuine pending bills.

A letter to the County Secretary Leboo Morintat from EACC Chief Executive Officer Twalib Mbarak dated February 5th 2020 reads:
“We are of the view that the County Government can pay the genuine suppliers and contractors in line with the existing laws and regulations on public finance management,” read the letter.

Sources intimated that after EACC's green light, cartels moved fast and prevailed upon Speaker Beatrice Elachi to move to the Supreme Court regarding a lacuna in the law in the absence of both Governor Mike Mbuvi Sonko and his deputy.

If the court allows Elachi to run, then the cartel will be free to loot City Hall as business continues as usual.

It is said, the cartel’s worry is that Sonko reshuffled his Cabinet recently indicating he is still calling shots at the County.

The cartel’s initial thought was the court had locked Sonko out of City Hall's management until his case was determined.

Other sources indicate that County MCAs are worried that with the current crisis at City Hall, President Uhuru Kenyatta has mooted a plot to dissolve it and all the MCAs and County Assembly teams including Elachi will be sent home.