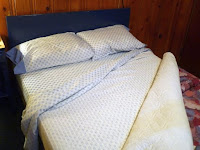 Sunday, February 9, 2020 - A man was confirmed dead after having sex with a prostitute in a city lodging.

According to eye witnesses, sex enhancement drugs were found at the scene of the incident, suggesting that the man may have died after taking the blue pills.

Recounting her encounter with her dead client, the prostitute who is identified as Precious, said that she was invited to the lodging facility by the deceased’s friend.

She disclosed that they had sweet moments together and then slept but she didn’t see the man taking the sex enhancement drugs.

While preparing to leave in the wee hours of the morning, she attempted to wake the man up to demand for her money and realized that his body was not moving.

At first, she thought that the man was pretending to be asleep to avoid paying her the dues.
However, she later realized that he was dead, forcing her to inform the management of the lodging.

Here’s a video of the incident.


.......during night out with commercial sex worker
A post shared by Lindaikejiblog (@lindaikejiblogofficial) on Feb 8, 2020 at 7:30am PST