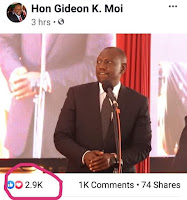 Immediately after the burial of former President Daniel Arap Moi, Gideon took to Facebook to thank ‘every single Kenyan who stood with them in their moments of grief.’

He accompanied his message with more than 15 pictures taken at the burial, mostly of significant leaders who spoke in Kabarak.
President Uhuru Kenyatta, ODM leader, Raila Odinga, and his former NASA principals, Kalonzo Musyoka, Musalia Mudavadi and Moses Wetangula were all there.

Gideon, who is also the KANU chairman, included a photo of Deputy President Dr William Ruto, who is believed to be his political rival in the Rift Valley.

Other leaders did not get as many likes with Raila coming a distant second at 200 likes and Mudavadi 50 likes.