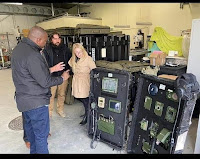 According to reports, the raid came a day after a search in Deputy President William Ruto's office, a secret affair reported to have unearthed documents related to the Ksh 39 billion military tender scandal.

Reports indicated that several guns and documents were recovered from Echesa's homes which are expected to help the agency build a case against the former CS.

They recovered a rifle, a Ceska and Berreta pistols owned by the politician and 104 rounds of ammunition.
The search was extended to homes of three other suspects who had been arrested alongside the politician.

Echesa led detectives in the raid that lasted two hours.

This followed a similar raid at Ruto's Harambee Annex offices where the sleuths reportedly made away with a number of documents.

They were apparently targeting CCTV footage of the office to ascertain what truly transpired.

Three close confidantes of the DP, personal aide Farouk Kibet, Chief of Staff Ken Osinde and Private Secretary Reuben Maiyo, are of interest in the case owing to their positions at the office.

“It was not exactly a raid, rather a visit to check a few things,” an officer who was close to the matter said.