See what RUTO has said after his allies, MOSES KURIA and MURKOMEN, were beaten and ejected from Kitui’s BBI rally in the presence of RAILA 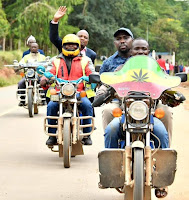 Monday February 3, 2020 - Deputy President William Ruto has condemned the violence witnessed in Kitui County on Saturday during the BBI consultative meeting saying it is no way to approach the debate.

This is after MPs allied to him, among them Moses Kuria, were roughed up and ejected from the rally for being anti-BBI.

Speaking yesterday, Ruto noted that bridges cannot be built with violence and that each person has a right to be heard as the BBI matter concerns all Kenyans.

“It is no time for brainwashing, bravado and positioning, that only help to create divisions," he said.

The DP pleaded with politicians to embrace unity and end tribal and divisive politics.

“Let us carry out this debate with respect.”

“There are no views that are better than others. Let all be given an opportunity to speak,” he said.

"Let us work together, be patient with one another and listen to each other.”

“Even the meek and weak have something to say.”

“This debate does not belong to leaders or politicians only.”

“You can’t build bridges with violence,” he added.

There were chaotic scenes at the Kitui rally on Saturday as Dr Ruto's allies were harassed by a team of bouncers hired to provide security.

The MPs, who arrived moments after the rally began, were barred from the main dais, where Opposition leaders Raila Odinga (Orange Democratic Movement) and Kalonzo Musyoka (Wiper), Governors and other elected leaders were seated.