See what MIGUNA told BBC about MOI‘s legacy, the old man left no legacy and only killed Kenyans like dogs - See the number of thousands he killed 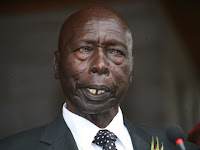 Miguna Miguna, who was interviewed with British Broadcasting Corporation (BBC), said Moi was a dictator who killed thousands of Kenyans during his 24 year rule.

“The BBC World called for my views about the dead Dictator Moi at midnight and I told them that Moi left a horrible legacy of destruction in Kenya.”

“On behalf of the 10,000 innocent Kenyans Moi butchered during the Wagalla Massacre; the 20,000 students, KAF soldiers and civilians he murdered after the 1982 coup attempt; and Titus Adungosi, Ochuka Raballa, Obuon, Okumu, Dr. Ouko, Oyugi Ogango and others....,” Miguna said

The General also regretted why Moi died without being punished for his crimes.