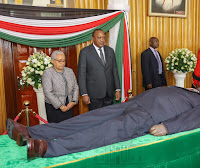 Saturday February 8, 2020 - Baringo residents have demanded that the body of former President, Daniel Moi, be taken to Kabarnet for them to view before the burial slated for Tuesday at his Kabarak home in Nakuru.

Mzee Moi was the MP for Baringo North and Central for a cumulative 39 years before his retirement in 2002.

He first joined Parliament in 1963 representing Baringo North before shifting base to Baringo Central in 1967 where he served until he retired.

The residents expressed disappointment that despite the former President serving as their MP for many years, the region will not have a chance to view his body at his place of birth.
“We are requesting the Government to consider bringing to either Kabarnet or Sacho for overnight a day before the burial as per our traditions.”

“This is our son and we should be involved in his burial arrangements,” said David Chesaro, an elder from Sacho in Baringo central sub-county.

The Government has announced that from Saturday to Monday, Kenyans will be allowed to view the body of the former Head of State, which will be lying in state at Parliament Buildings in Nairobi.

Former President Moi will be accorded a 19-gun salute in a series of elaborate military ceremonies leading to his burial on Wednesday, February 12th, at his Kabarak home in Nakuru County.

There is no mention of Kabarnet town, the home town of the former Head of State, in the burial plans.