See how RUTO outsmarted his hater, GIDEON, and sneaked into MOI’s Kabarnet residence after being blocked from viewing his body at Lee Funeral Home 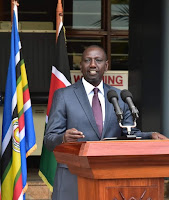 This is after efficaciously barring Ruto from viewing the body of his father at Lee Funeral Home earlier on Tuesday.

Reliable sources have intimated that most of Moi’s family members rebuffed Gideon’s attempts to keep Ruto out.

Ruto is said to have landed at Kabarnet Gardens in his chopper after flying from Kakamega, where he had gone to condole with parents who lost their children in Monday's school stampede.

The DP stormed out of Lee Funeral morgue in rage after being denied access to Moi’s body, boarded his chopper and flew to Kakamega.

It is said that the DP's decision to fly directly to the residence was a smart move meant to outwit characters who were hellbent on keeping him out.