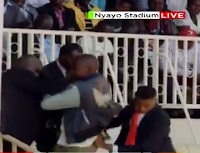 Tuesday, February 11, 2020 - This guy tried to heckle and shout down Gideon Moi during his father, late President Moi’s service in Nyayo Stadium but regretted his actions immediately.

Mean looking Recce Squad standing by pounced on him and quickly whisked him away from the cameras.

Only God knows what happened to him.

The late former President’s body left Lee Funeral Home at around 8:30 am for State House where it was received by President Uhuru Kenyatta for the Final Salute before being taken to Nyayo National Stadium.

Thousands of Kenyans and several Heads of State attended the service.

Mzee Moi will be buried on Wednesday 12, at his Kabarak home next to his late wife, Lena.