See how KIBAKI’s grandson mocked MIGUNA after he attacked the former president for wearing ‘ugly’ shoes to view Moi’s body!

However, the shoes Kibaki was wearing when he arrived at Parliament to view Moi’s body left tongues wagging.

The former Head of State was rocking black sneakers and a suit.

Controversial lawyer, Miguna Miguna, went ballistic on Kibaki’s handlers for making him wear such shoes describing them as ‘ugly and uncomfortable’
This is despite revelations that they are not ordinary sneakers but orthopedic shoes to aid his mobility.

Taking to Twitter, Miguna wrote: “Kenyans pay retired presidents who have looted billions like Mwai Kibaki millions annually; hire dozens of servants including drivers, cooks, and bodyguards; and even built mansions with complete fuel stations, yet no one could dress up Kibaki with decent pairs of shoes today?" the Canada-based lawyer stated.

"Those are ugly, uncomfortable sports/running shoes - not orthopedic shoes. Even a village idiot should know that" Miguna added.

This did not go down well with Kibaki’s grandson, Sean Andrew, who shared a photo of Miguna wearing slippers aboard a plane when he was deported from Kenya,

While sharing the photo he wrote:

"Lemme just leave this here so we don't forget," 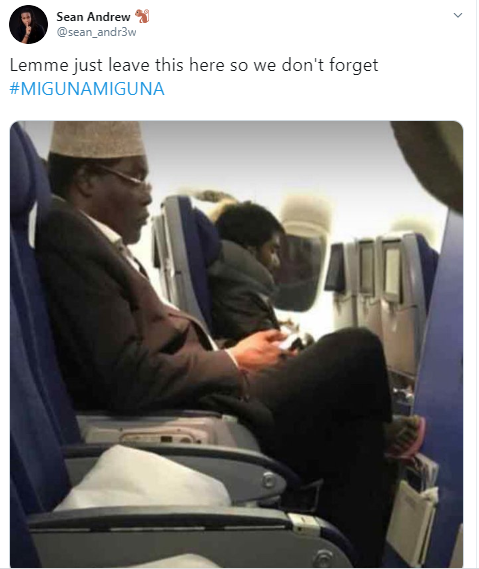