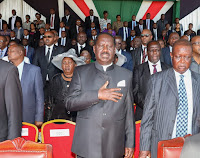 The plane carrying Raila arrived with an entourage of his close family members and a number of ODM politicians.

However, the security guards appeared not to have recognized Raila's brother and quickly grabbed his coat - causing an embarrassing commotion that attracted the attention of Ida and Raila.
A video of the incident showed Oburu supporting himself with Ida after the grab from a dark-suit wearing bodyguard.

Raila intervened and told off the bodyguard before they eventually allowed Oburu into the VIP dais.

The burial and funeral services, organised by the Kenya Defense Forces (KDF), have seen an overwhelming number of VIPs which appeared to have strained security management in some instances.

On Tuesday, the men in black manning Nyayo Stadium roughed up Rwandan President Paul Kagame's bodyguards as they attempted to escort their boss into the VIP dais.