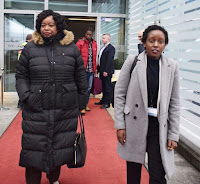 In the scandal, Echesa convinced directors of Eco Advanced Technologies LLC in Poland that he can connect them to a tender worth Sh 40 billion to supply arms to Kenya Defence Forces (KDF).
In exchange, Echesa demanded a kickback of sh 4 billion which is equivalent to 10 percent of the value of the tender.

The company’s directors visited Kenya’s consulate in Poland and it is where they met Ruto’s daughter, June, who convinced them that the Sh 40 billion tender was valid.

June is the Charge D' Affaires in Warsaw, Poland, and she is said to be the facilitator of the deal.

After confirming the authenticity of the deal, the directors wired Sh 11.5 million to Echesa and they were planning to wire another Sh 52 million on Thursday before they realised that the deal was a con game.

Sources say Ruto and his daughter were aware of the deal and they were expecting billions from it.