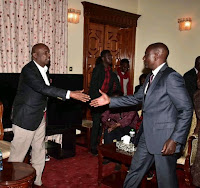 Wednesday, February 5, 2020 - KANU chairman, Gideon Moi, is a big liar if what he has been telling his late father, former President Daniel Moi, is anything to go by.

Gideon, who is also the Baringo Senator was Moi’s favourite son and he had been with mzee until he took his last breath on Tuesday morning.

According to impeccable sources, senior Moi was suffering an acute memory loss and Gideon used this to his advantage.

"Gideon Moi then closed all avenues that could lead Ruto not to see him, until his demise now Gideon Moi has accepted everyone to visit them as orphans,” said the source.

To cement this, Dr Ruto visited the Moi family on Tuesday and he was not barred.