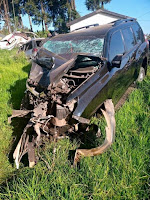 Wednesday February 12, 2020 - Bernard Muya, the driver of the matatu that was involved in an accident with Jubilee Party SG, Raphael Tuju, is reported to have been put on life support.

According to media reports, 12 passengers were taken to hospital with slight injuries, one with a chest injury and another with head trauma, but all are in a stable condition.

Tuju's driver and bodyguard are also reported to be in stable condition.

According to a source from the AIC Kijabe Hospital, the Jubilee Sec-Gen Raphael Tuju is currently undergoing surgery.

This confirmation comes barely an hour after his family was airlifted to Kijabe Hospital where he is still admitted.
The family was picked by a police helicopter at the Wilson Airport minutes after 9.00 a.m.

Raphael Tuju's vehicle is at the Lari Police Station after the grisly accident that landed him in hospital.

The accident occurred at Magina, along the Nakuru-Nairobi Highway.

Tuu was on his way to the late President Daniel Moi's Kabarak home when the incident took place.

He is reported to have sustained minor injuries in the accident but is in a stable condition.