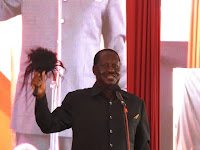 Jowie is the prime suspect in the murder of businesswoman Monica Kimani in 2018.

On Thursday, immediately after Moi’s burial, Justice James Wakiaga, granted Jowie a Sh 2 million cash bail or a bond of Sh 3 million.
Speaking on Friday at Maranda High School during the institution's 100th anniversary celebrations, the former Premier left the audience in stitches when he recounted how his chorus led to Jowie's freedom.

"The other day I shouted in Kabarak jowi jowi jowi and the following day Jowie was released,”’ Raila stated.

A section of Kenyans had also hilariously claimed Jowie's freedom was orchestrated by Raila's traditional antics at the burial of Mzee Moi.

"A few hours after Baba pulled a "Jowi, Jowi" during Moi's burial, this boychild has now been released. Many of us did not understand what he meant," wrote a netizen identified as Joseph Kinoti.