RAILA Junior calls out his sister, ROSEMARY, for ‘embarrassing’ President UHURU and RAILA in the US (LOOK) 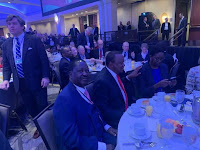 Friday, February 7, 2020 - Raila Junior has trolled his sister, Rosemary, over her behavior in the US where she accompanied President Uhuru and her father at the US National Prayer Breakfast in Washington.

During the event that was presided over by US President Donald Trump, Rosemary is seen using her phone while in the VIP table alongside Uhuru and Raila.

In the photo, Uhuru is seen parting her on the shoulder to get her attention and Junior reckons that her conduct was unbecoming.

Reacting to the photo, Junior wrote: "Uko kwa meza na BBI nzima, ukiskiza trump na bado unaangalia trending news kwa Twitter? (You are sitting with the entire BBI team as Trump is talking yet you are engrossed on your phone?)

President Uhuru and his handshake partner, Raila Odinga, were invited to the US due to their demonstrated commitment to peaceful and constructive resolution of internal conflicts in Africa. 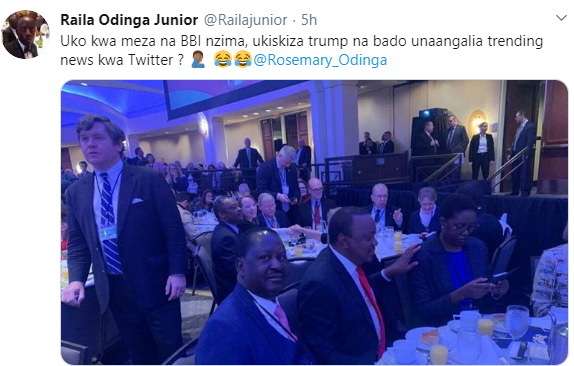