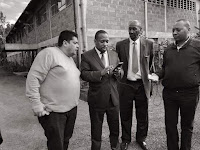 On Tuesday, Sonko who is facing a battery of corruption cases, surrendered Nairobi County to the National Government until his cases are heard and determined.

According to revered blogger, Robert Alai, the Governor approached Raila Odinga in Mombasa during the time of the Building Bridges Initiative (BBI) to help him deal with corruption cases.

Instead of advising him like a father, Raila Odinga demanded money from the flamboyant Governor who is staring at a possible jail term over corruption.

“Raila convinced him to take the deal of handing over the County but after getting huge donations from the Governor,” Alai alleged.