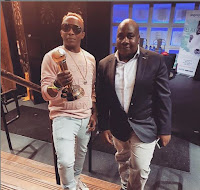 Sadat revealed that he worked with Papa from 2013 to 2019 when his deal with the Maliza Umasikini record label ended.

The flashy businessman stated that he was grateful to have worked with the talented artiste and called upon speedy investigations into the death of the award-winning singer.

He also assured Kenyans that Maliza Umaskini will stand by the family, friends, and colleagues in this difficult period.

Read the statement below.

“It is with profound shock and deep sorrow that the Maliza umasikini fraternity received the news of the untimely death of Dennis Mwangi also known as “Papa Dennis”.

"Papa Dennis was officially signed by the Maliza Umasikini record label between 2013 and March 2019.

"During this period Papa Dennis achieved the unthinkable in the Gospel Music industry. Rising from humble beginnings to a globally celebrated Artist who won several awards locally, across the continent of Africa and globally celebrated including the Afrima Awards in the United States of America in 2018."

Papa Dennis broke barriers and stretched boundaries in the music industry in unparalleled fashion. He certainly remains an Icon and a great inspiration to the talented youth of our nation and Africa at large”

“As Maliza Umasikini we shall stand with the family, friends, and colleagues in this difficult time.Papa Dennis was not only a part of Maliza Umasikini but also a friend and neighbour in Matunda,Likuyani, Kakamega county.

"We urge all fans,Artistes and Kenyans at large to join hands in prayer in this difficult time.It is our humble prayer that the Almighty God will rest the Soul of Dennis Mwangi “Papa Dennis” in eternal peace”