My life is in danger! ECHESA’s mercenaries have been sent to assassinate me – RUTO now claims as the Sh40 billion military scam claims its first casualties

Thursday February 20, 2020 – Deputy President William Ruto has sensationally claimed that his life is in danger following what he termed as a "serious security breach" at his Harambee House Annex.

This is after former CS, Rashid Echesa, made his way to the DP’s Harambee House Annex office with his foreign arms dealers in broad daylight from where they signed a fake military tender deal.

The details emerged even as a section of Ruto's allies began claiming that the fake investors in the Sh40 billion military tender were in fact mercenaries - latter day Artur brothers - who could be a huge security threat to the DP.

Ruto has called for a thorough forensic investigation into the two foreigners who accessed his office alongside Echesa on February 13th to allegedly sign the fake military surveillance deal.

He declared that the two foreigners - Mustafa Lofty and Stanley Kozlowski Bruno - must not be allowed to leave the country before a forensic investigation is done to establish why they are in the country and the real reason they visited his office.

This comes even as it emerged that the DP had asked for an overhaul of his security personnel at his Harambee House Annex office.

The four, two from Prisons and two from Administration Police, recorded statements yesterday in relation to the Sh40 billion fake military equipment scandal.

Last year, Ruto alleged that some Cabinet Secretaries, most of them close associates of President Uhuru Kenyatta, were meeting at the La Mada Hotel in Nairobi to plan his assassination.

See this letter to the police boss 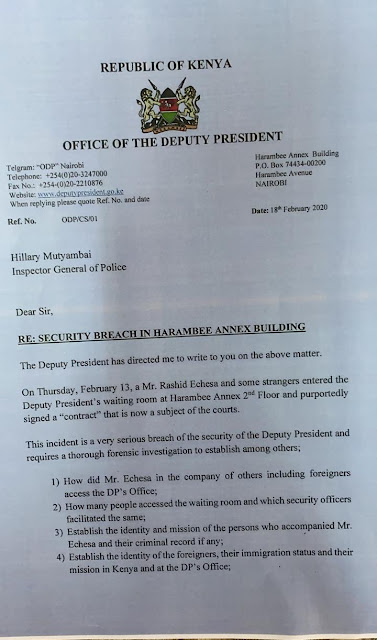 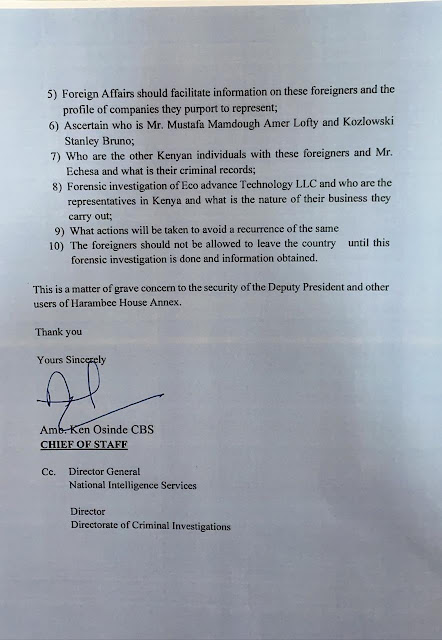