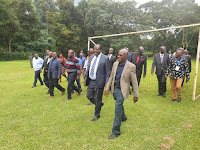 Thursday, February 6, 2020 - Former Kakamega Senator, Dr. Boni Khalwale, has sensationally claimed that the 14 pupils who died in a stampede in Kakamega Primary School were offered as a sacrifice by devil worshippers.

According to Khalwale, some churches with questionable practices have been hiring the school to hold their services there.

"Kakamega Primary School is rented out to churches every Sunday.”

“I am now asking the Minister to ban church activities within the school," Khalwale told CS Magoha.

“You know that there are churches which are of questionable practice, especially how they deal with our children,” he added.

"I am a doctor of medicine, and I am telling you that all the 14 children who died, none had wounds oozing fresh blood," Khalwale said.

"We want the Minister to know that we won’t allow anybody, including the church, to consume our children’s blood, and sacrifice them through satanic worship,” he added.

Meanwhile, a requiem mass for the 14 pupils will be held on Friday at Bukhungu Stadium from 10 am, then the bodies will be released to the families for burial preparations.