Kenyans SHOCKED after a VIDEO of a Luyha man having SEX with his cousin spreads online like bushfire (WATCH)! This is what he told police after arrest

Sunday, February 16, 2020 - Kenyans reacted in shock after a video of a Luyha man having sex with his cousin who is said to be under age surfaced online. (video at the bottom)

Detectives from the Criminal Investigation Department traced the man, who has since been identified as Patrick Ayoyi, in Kericho after the sex video went viral and arrested him.

The man, who is married with three children, admitted that he was the one who recorded the sex video that has gone viral after he was taken to Kericho Police Station.
He told police officers that he took the sex video with the consent of the young girl who is his cousin but refuted claims that she was under-age.

Patrick, a cyber attendant, further claimed that he took the video in 2017 for fun and at that time, she was 20 years old and not under-age as claimed on social media.

He added that the girl in the sex video is now married and it is true that they are related.

He further said that the sex video, which he claims he recorded 3 years ago, was leaked after someone stole his phone.

The suspect is still under police custody. 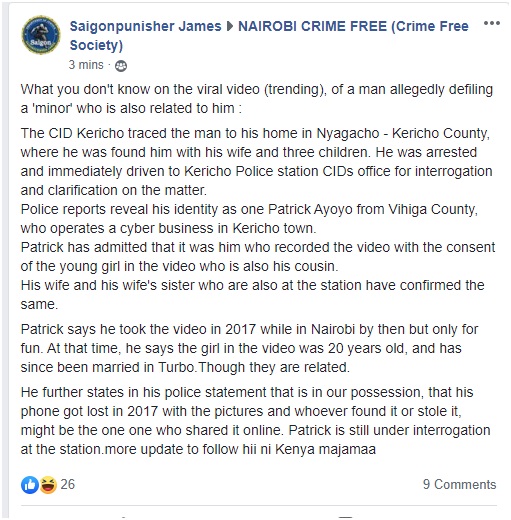 We have the video but we don't want to upload it here, however, if you have not watched it and feel the need to, click here>>>>